How long have you been a member of the GCWS and why did you join?
I met Marilyn Bishop (GCWS Founder) at a Christmas house tour and was so impressed by her that I joined GCWS shortly thereafter, just as she was organizing the group.
Have you held any positions with the GCWS; if so, what positions?
No. 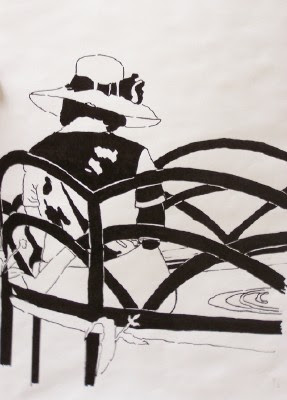 What are some of your artistic achievements?
I have participated in all of the GCWS shows (except for this year). A few years ago my husband, Sam, and I held a Christmas fund raiser art show at his former law firm (Strauss and Troy in Cincinnati, Ohio). In addition, my work has been shown in several venues in the Village of Glendale, the community where we reside. Those shows were held variously in the Village Square, the Town Hall and the Lyceum. We have also taken several courses for a week at a time in Traverse City, Michigan, and several workshops from national artists. 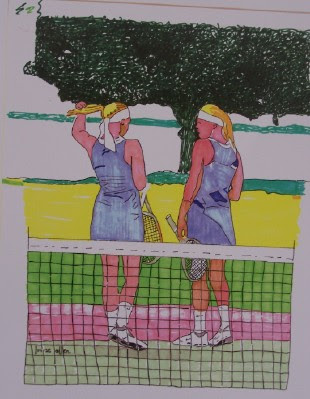 Describe your usual procedures for creating a painting.
I feel most confident when I enlarge and trace onto my paper if I’m going for reality. Or else I paint intuitively, where I feel more confident with color and organic shapes. I prefer no faces! I’ve been told by at least two teachers “Louise, you do everything wrong but it works!” 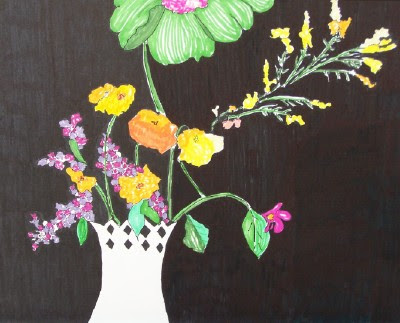 How long have you been painting?
15 yrs. My husband Sam and I began painting together when he retired from his law firm. We always say how lucky we are to both have the same passion. 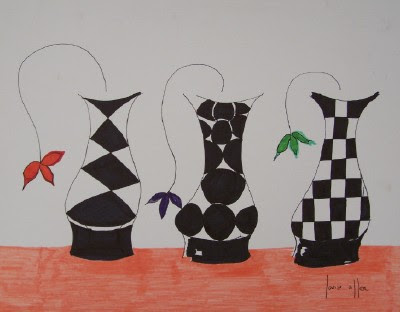 In what medium, other than watercolor or acrylic, do you work?
I work in liquid acrylic on yupo and for last year and a half I’ve been using Prismacolor markers on mat board.
Where do you get your inspiration for paintings?
Often it just comes out of me. I also work from photos. Sometimes I’ll see something in the newspaper and get a gut response to it, tears in my eyes, and feel a need to paint that. But, because my work is usually abstract and I change the photo so much, you can’t even tell it’s the same thing. 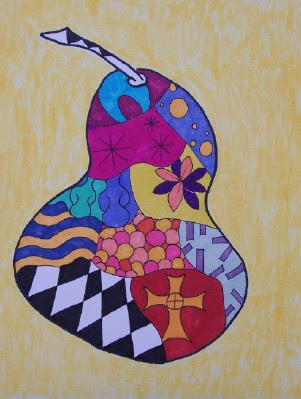 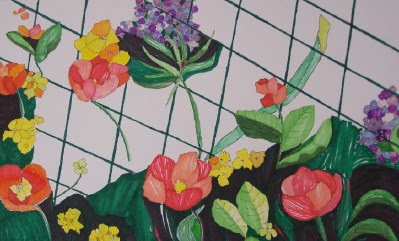 Is there anything else you would like for us to know about you and your art?
I really love everything I do. I love the process and I love the work. At a show more than one person has looked at my work and said to me “it’s my favorite in this whole show but I wouldn’t want to own it”! My husband, Sam, has been handicapped for 11 years, but we still paint together and it’s so wonderful to have this creative outlet together. We have painted in Ireland, twice in southern France for a week at a time, and we rented a cottage outside of Nice for three weeks. We did the same thing in Italy. Whenever either one of us sells a painting, we give that money to the Adolescent Health Center at Children’s Hospital of Cincinnati.
Posted by Greater Cincinnati Watercolor Society at 3:26 PM No comments:

The meeting was called to order by our president Eileen Hulsman.

Index Cards:
Index cards were passed out before the meeting. Eileen instructed everyone to write down something they liked or disliked about the club during the past year, or things they would like to see in the future. She requested that we do not sign them and to place them in the basket after the meeting.

Scholarship Fund:
Eileen is looking for someone to volunteer to be chairmen of the Scholarship fund. There are resources available for the person that would volunteer to do the job. Even though they would like the student to be a watercolorist they will accept any art medium. The only requirement is that they plan on pursuing art in college and the future.

Joan O’Leary volunteered to be the chairmen of the Scholarship committee.

Art show:
The next art show for the club will be June 18 at Sharon Woods. It will be a one week show. Eileen needs someone to volunteer to be the chairmen for this show. No one volunteered at this meeting. The show will probably have the same structure as the last show with prizes and judging

Howard Krause wanted to say Thank You to the club members for helping him move forward with his artwork. He was happy to report that he recently sold 6 paintings, now teaches classes, and had a workshop in Lakeside,Ohio . He also will be teaching on a cruise to Alaska. Howard read excerpts from an article on watercolors. The main point of the article was that many schools discourage teaching watercolors because it’s not a medium that is accepted as well as others.

Marilyn Bishop reminded the members that the club’s library has 8 or 10 DVD’s that can be signed out. All you have to do is sign the book to take them out. She also said that this February was the 10th anniversary of the club. She thought that at the spring show it might be nice to have a reunion for the club. Everyone seemed to like the idea.

Deb Ward handed out membership dues forms to everyone at the meeting. Dues are due March 1,2012 and can be paid to Alice Fossett. Also there was a correction to the form. The blogspot address was wrong and it should be: grtrcincyws.blogspot.com.

Joyce Grothause from Milford ,Ohio . She is a student of Susan Grogan.

Our February program will be on how to paint self portraits given by Daryl Urig. Nancy wasn’t sure what we will need to bring but will let us know through the blogspot.

Nancy Neville’s topic for the March presentation is “Guiding the Eye through Your Paintings”.

April and May programs were not discussed at this time.
﻿ Nancy then introduced our presenter for January, Barb Smucker.  She presented on “Creating Contrast for Visual Interest, Excitement and Drama.”   Barbara has been featured in national art magazines and encourages students to paint to express their own spirit. Barb discussed three important parts of art: inspiration, creativity and technique, but warned that some can get too caught up in the technique at times. She referred to a quote which equated the satisfaction of participating in an art group to that experienced if receiving a $50,000 raise in salary. She also compared art to music which goes directly to the heart, saying that we want our art to do the same.

She advised the group to experiment and try some non-traditional approaches to their watercolor. She also gave out two handouts: Design Principles to Remember, and Contrast in Your Painting.  Barb gave us 3 design principles to remember when considering using contrast:
“1. A little of this and a lot of that.”
“2. A lot, some and a little.”
“3. No two passages the same.”

Barb stated that viewers want to see the personality of the artist in the painting. She exhibited several small paintings that she had quickly created. She also described the advantages of watercolor as being cleaner than oil, having more luminosity of color. She advises artists to do some art daily, even if for only ten minutes. Draw and paint one subject, such as a chair, every day for a month. You will become more creative. She also suggested using watercolor pencils as an easy way to keep materials handy for frequent use.

Barb also painted live for the group to show her use of contrast, and provided a critique before her workshop.
She also talked about different types of contrast (light vs. dark, rough vs. smooth textures, large vs. small shapes). Barb was able to show many examples of these contrasts in paintings by different artists. After talking about contrast she demonstrated by painting a picture using color contrast. A workshop for those interested followed the meeting. 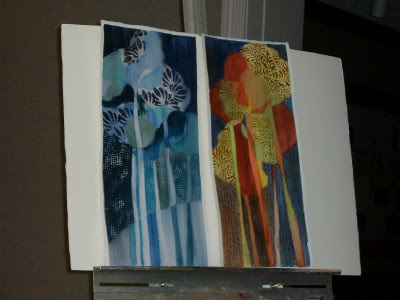 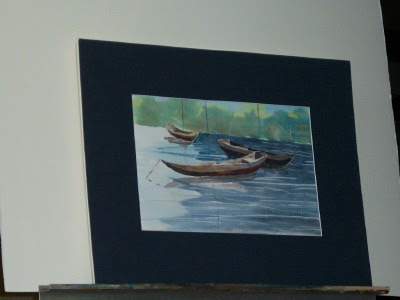 Posted by Greater Cincinnati Watercolor Society at 5:42 PM No comments: