How long have you been a member of the GCWS and why did you join?
Except for the very first meeting I have been a member of GCWS and I joined because I wanted not only to learn how to paint watercolors but to see if I am any good. What strikes me from the very beginning is that even though many of the members are professional artists I was accepted. It is also via the critique sessions that I found the true value of GCWS - the positive encouragement I receive at each meeting.

Have you held any positions with the GCWS; if so, what positions?
Due to travel and family commitments I am unable to be an office holder. 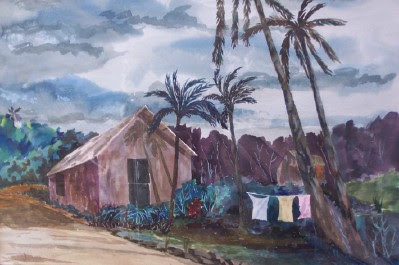 What are some of your artistic achievements?
There are two that come to mind:
1- When I look back at some of my earliest paintings I see a vast difference in my paintings compared with today's.
2- The confidence to show my paintings in public 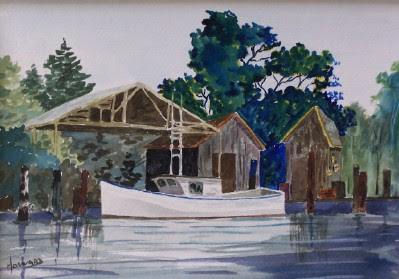 Describe your usual procedures for creating a painting.
Many of the paintings that I consider "finished" have taken up to 2 or 3 years of contemplation before putting brush to paper. Most of that time was spent in drawing and redrawing and thinking about the painting's composition and value scheme. Once I am satisfied with this I usually paint very fast. I like wet-in wet but, of course, the subject matter will dictate the technique(s) I use in a particular painting.

How long have you been painting?
It seems I have been doing art all my life.

In what medium, other than watercolor or acrylic, do you work?
None 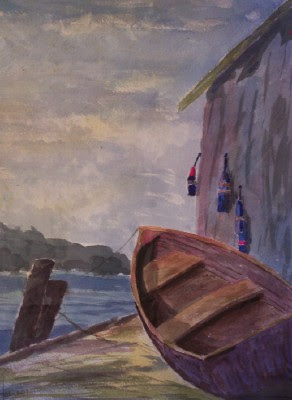 Where do you get your inspiration for paintings?
Since we travel a lot I usually draw/sketch the places we see. I do take artistic license and rearrange the elements to give a more pleasing composition. And I reply upon photographs.

Are you a teacher?
Yes at hobby Lobby, the Oxford Community Art Center and I will be teaching art on Cruise ships.

Where do you see yourself in the future? (i.e., is painting a hobby; will you enter shows; do you see yourself teaching?)
It is very difficult for me to say where my artistic efforts will lead me. I enjoy knowing the members of GCWS and I hope to continue to improve. I have entered a few juried shows but have only been accepted in a few. I enjoy sharing what I learn about art and making paintings with others. And hope to be able to continue do do this. 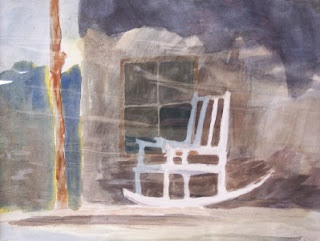 Is there anything else you would like for us to know about you and your art
When I first started out to see if I could actually succeed in making a watercolor painting that was pleasing to look at I had no real idea as to how to accomplish this. Then I met Ray and Diane Loos. They had a bumper sticker on their car that said - I LOVE WATERCOLOR. I left them a note and they were kind enough to call me. I found out that Ray was teaching in Oxford that summer and during his workshop he said two things:
1- The only way to succeed is daily practice which I try to do
2- That I had an eye for composition that was half the battle toward making a successful painting.

I have sold a number of paintings over the past few years and to see my work accepted by others brings me great satisfaction and encouragement.
Posted by Greater Cincinnati Watercolor Society at 9:55 AM No comments:

Rhonda introduced Merle Rosen who presented the program on Acrylic Paints. She works in a variety of mediums, has several DVD’s out on painting, and does workshops with “Golden Mediums“.

Merle started the program by telling us of a new acrylic paint product called “Open“. It’s an acrylic paint that takes much longer to dry than a normal acrylic paint. You are able to mix it with regular acrylic to extend the drying time a little. Open paints also tend to have less pigment in them.

She alsogave us a brief history of Bacour Paints and how they developed their products.

Polymer medium is the building block of all acrylic paints. It is white when wet but dries clear. There are 2 types of paint colors - inorganic which is mineral based, and organic, invented after WWII, which is chemical based. Inorganic is opaque and organic is more transparent. The results when mixing colors to get secondary colors are quite different. The organic paints give you a clearer colors.

Merle continued to give us information on pigments, glazes, matting agents, and polymer mediums. She talked abut a product called GAC 400 which is a single polymer that is a stiffing agent. There were so many products that she talked about that is hard to go into detail on all of them. Some of the more interesting ones were the iridescent and interference colors along with the course molding paste. In addition she showed us samples of the different types of acrylic and how they worked.

I think that a lot of us left feeling a bit overwhelmed with all the information. Though I have never painted with acrylic, it was very inspiring. Once again it was another wonderful program that will help us a lot in the future.
(Submitted by Kathy Kuyper, photos by Deb Ward)
Posted by Greater Cincinnati Watercolor Society at 12:27 PM No comments:

Past president Eileen Hulsman was back after multiple surgeries. A plaque was presented to her for her years of service as president of the club. Shirley Knollman also gave her a fun gift of a tiara.

Deb Ward then started the meeting by having us greet our neighbors sitting next to us, hoping that it will give us all a chance to become better acquainted with all the members. She has also decided to start our meetings with a quote to give us something to think about. The quote for this meeting was “See the value in what your doing.” She felt that this could be used not only in life but also with painting.

Deb asked if anyone had gone to see the Nancy Neville Art Show or to any other art shows or museums during the past month. There were several members that had seen Nancy’s show and said that it was very nice.

Deb has been going through the membership cards and has taken notes of all the ideas that were sent in. She hopes to incorporate these ideas throughout the year. The leadership team was then reintroduced to the club.

Deb feels that Les Miley should be allowed to be an honorary member of the club since he does so much for us by setting up and taking down the chairs and tables for the meeting.

We had three guest attend this meeting: Britt Hedges and her daughter Olivia who are friends of Nancy Wisely, and LaVerne Klug who was once a member and has many friends in the club. She seemed to be interested in becoming a member again.

Sally updated us on the balance, expenses and income for the last month. Income came from the 80 members who had paid their membership dues. There are still several members that need to renew.

Joan reported that students were starting to send in their work to be juried. She will be getting a team together to judge the work soon.

Deb stressed that we still need a volunteer to be chairman of the July show at the Kennedy Heights Art Center. Alice Fossett volunteered to make title cards and Jane Hittinger said she would help by taking in the paintings. We still need a person to be in charge. Deb warned that we have one month to come up with a chairperson or there will be no show. The show is scheduled to take place the last week of July and the first week of August.

Rhonda announced that she is trying to get together a weekend workshop for the club. Hopefully it would be a weekend in November. She is trying to keep the cost around $200. Charlynn Knight is the artist she is hoping to have do the workshop. Rhonda will let us know if the gets scheduled.

Tina Tamarro will have a program on Art History next month along with a slide show. She will not do a critique. Howard Krauss will do a paint along after the program. It will be a lesson on blue and yellow do not make green.

Susan Grogan will have the program in June. It will be Watercolor on Gesso.