Have you held any positions with the GCWS; if so, what positions?
No.

What are some of your artistic achievements?
I’ve put together a set of Art Instruction Videos available through Amazon.com.  They are extremely detailed and helpful – not “” – but I’m proud of them! 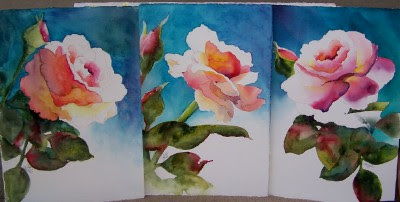 Describe your usual procedures for creating a painting.
Portraiture:  I work from my own photos taken using a single source of light for soft shadows.  I work from a detailed drawing using transparent paint and glaze in layers.
I paint more direct for flowers – from flowers in my garden – paint what you love!

How long have you been painting.
27 years. 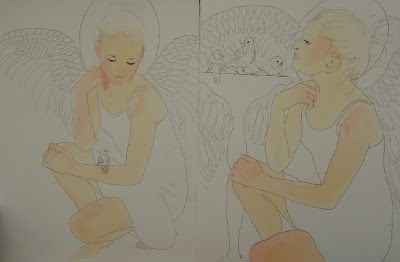 In what medium, other than watercolor or acrylic, do you work?
I love to work with ink.
Where do you get your inspiration for paintings?Lovely flowers . . . sweet faces . . . who can resist?
Are you a teacher?
I have taught, but since my husband and I downsized I don’t have room in my studio to teach. 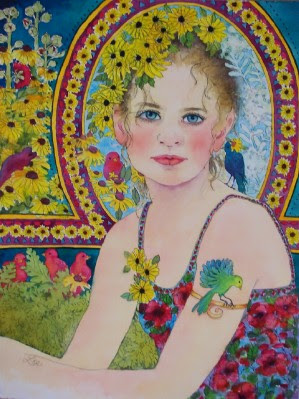 Is there anything else you would like for us to know about you and your art?
When I’m painting . . . I’m happy!
When life gets in the way . . . I get frustrated.
I wish I was better at balance . . . keeping the balls in the air!

Your website:  http://www.zoeartist.net/
Posted by Greater Cincinnati Watercolor Society at 9:21 AM No comments:

Susan Grogan gave the program this month on painting watercolors on gesso. She decided that it would be something different for all of us.

Susan is an accomplished artist in many different mediums including pencil, acrylics, watercolor and pen and ink. She has won many awards for her art work including best of Show at Miami Twp. show and most recently a banner contest. The banner will be displayed across Winton Rd.

The program was started with the process of putting gesso on your watercolor paper. It was recommended that you use 140 lb. paper and a good gesso. The nice thing about using the gesso technique is that you can actually cover  an old painting. Susan covered the paper with gesso by using “X” strokes. She then layered wax paper over it to smooth out some of the texture. This step can be eliminated if you like the very rough texture.

Her first step after the gesso dried was to cover the paper with a medium value wash. After the wash has dried you can then draw your design. Using a subject that has a lot of contrast is helpful when painting on gesso. The whites in your value sketch can be lifted out after the background has dried. Susan lifted out the paint by wetting the surface with a wet brush  then scrubbing the paper and lifting the paint. After you have lifted the paint in the areas that need it, it’s time to start putting in the other values.
Susan gave us some helpful hints when painting on gesso. It’s important to keep the surface wet when you are laying in the background. The easiest way to do this is to mist the paper if it appears to be drying too fast. That way you will not have hard edges in the color. Don’t isolate a color in the background; be sure to sprinkle it other places. When painting on gesso with watercolors the paint will dry much lighter. It is easy enough to go over areas again to achieve the value that you want. Remember that the most important thing is value in a painting rather than making the subject a certain color.
Even though Susan said she was a bit nervous teaching a big group she did an amazing job. Painting on gesso is a slow process but she kept our interest with all her tid bits of information about painting, paints and the gesso technique. I think we all have a new outlet for some of our discarded paintings.
Thank you Susan for the great demonstration on a different watercolor painting.
Posted by Greater Cincinnati Watercolor Society at 9:00 AM 1 comment:

Deb started the June meeting in the usual way with everyone greeting the people that were sitting around them. I know that has helped me to get to know a lot more members of the club.

She always leads a friendly discussion on whose been painting and actively doing other art related projects. Her quote for this month is “Creative minds are rarely tidy”.  She followed up with the fact that, for a lot of us, our workspaces are rarely tidy .

The first order of business centered around  the Robert Fabe paintings donated by Carol Steuer.  There will be a silent auction on the paintings next month. The proceeds from the auction will go towards a projector   for the club. Any paintings that don’t sell at the silent auction will be up for sale at the and Evergreen Art Shows.

Art Shows:
Joyce Grothaus typed up the registration for the July show. She passed the forms out as we came into the meeting today. Those who did not attend the meeting will get their forms in the mail. Drop off for the show is July 18 from 10 - 12. The show opens on Saturday July 21 from 1 - 4 at which time the will be open to the public. It was originally scheduled to run for 2 weeks but they were nice enough to give us an  extra week for the same price. Pick up will be on August 11 from 4 -5 following the show or the following Tuesday  August 14 from 10 -3.

Marilyn Bishop needs photos of art work to go with the news releases for the papers. Unfortunately she needs these by Friday. She will also need some photos for the news release for the Evergreen Show in September. Rhonda Carpenter will also need pictures of some paintings for an email invitation that she is working on for the show. This will be sent to us so we can send it to our friends and families. Taylor Bush will be in charge of hanging the show at . There will be a 30% commission fee for the show.

The fall show will be at Evergreen Retirement Community. The show will open Sunday Sept. 23 and close on October 28. Drop off for the show will be on Friday,  September 21, and pick up will be after the show on October 28 or the following day. Marilyn Bishop will do the publicity for that show. It was decided by the leadership team that the Evergreen show would be judged and prizes awarded. The prize money will be the same as last year.

Next month there will be a signup sheet for sitting and hanging the show.  Evergreen would like us to have someone in the entry hut to direct traffic if possible. As of right  now, a  judge is still needed for the show. The show may be called our 10th Anniversary Show.

Brochures:
We would like to have new brochures printed.  On the inside are 5 paintings from some of our members. There were only a small amount of brochures printed so when these are gone new ones will be made. Deb wanted some new photos of  member’s paintings for the next printing of the brochure.  You can send them to her via email or bring paintings to a meeting and she will take photos.   Jane Hittinger has these brochures if you are interested.  These brochures are available for members to take to classes or art shows to distribute.

Workshop:
Last month Rhonda Carpenter had a sign up sheet for the Christopher Leeper Workshop. The response for this workshop left Ronda with a waiting list. She has convinced Christopher to do another workshop for us in the Spring. The first workshop will  be October 26 -28. The Spring workshop will be April 5 -7. The cost of the workshop is $100 per person and the art club is subsidizing the rest of the cost.

Christopher Leeper is the president of the Ohio Watercolor Society. To find out more about him visit his website: www.christopherleeper.com .

Rhonda will be back next month to tell us more about the workshop and other programs for the club.

Feature Artist:
Donna Cameron is the feature artist on our blogsite this month.

Next month feature artist will be Taylor Bush.

Announcement:
Next Month the meeting will be on the second Wednesday, July 11, since the first Wednesday is a holiday.

Deb requested that anyone with an announcement bring the information to me at meetings so that all the dates, time and places are accurate in the minutes.

“Colerain Artists” is having a show June 23 - August 4 at the on Wessel Dr.

Eileen has a card for people to sign for Mary Marxen who is going through chemo therapy.

Deb Ward announced that she received second place in the Rising Sun Art show and will be a judge for Bethesda North Show. She also has a painting in the Ohio Watercolor Society Show.

(Submitted by Kathy Kuyper)
Posted by Greater Cincinnati Watercolor Society at 8:00 AM No comments: